Opposition steals a march in Malaysia 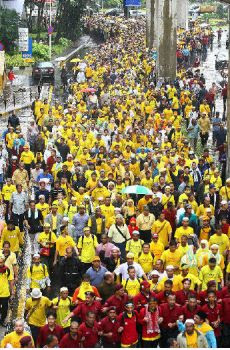 KUALA LUMPUR - Bad weather and government intimidation tactics failed to prevent as many as an estimated 40,000 people from gathering in the Malaysian capital to demand electoral reforms, marking the country's largest public protest in nearly 10 years and a stiff new opposition challenge to Prime Minister Abdullah Badawi's scandal-plagued administration.


On Friday, Abdullah said the government would not tolerate street demonstrations, while his son-in-law, Khairy Jamaluddin, called the activists "monkeys" and said if the protesters sought to challenge the ruling coalition that has ruled the country since independence to do so at the polls - ignoring, or merely failing to comprehend, the premise of the rally.


Police checkpoints were stationed at all major arteries into the city and as far as the northern state of Kedah to prevent ralliers from attending, those involved in the demonstrations said. On Saturday, thousands of police were on hand, blocking off roads and cordoning protesters in various locations, to keep them from gathering en masse. Outside the Jamek Mosque train terminal police fired tear gas at largely quiescent demonstrators. According to government news reports, 245 people were arrested and later released.


The ralliers, many wearing yellow t-shirts, planned to march from the Jamek Mosque area to the king's palace to deliver a memorandum containing their electoral reform demands, including a cleanup of the voter rolls and free and fair access to the state-controlled media. Elections have in the past been plagued by allegations of phantom voting, vote-buying and manipulative gerrymandering. The election commission has failed to address these issues, said rally organizers BERSIH (Clean), a coalition of 26 non-governmental organizations as well as non-ruling political parties.


An incident witnessed by this correspondent at about 4pm on Tun Perak Road on Saturday was a window into the ill health of Malaysian democracy. As riot police stood watch behind shields, ralliers began to move parallel to them down the sidewalk. Those in the front urged the others to pull forward, but there was a pronounced apprehension about the crowd - a stutter in the step, as if the notion of free expression was only vaguely familiar.


Some twirled Malaysian flags. Others waved to police in a gesture of goodwill. Then suddenly police blitzed from the side, sending protesters scurrying. Some of those caught were dragged to the ground and kicked and punched by several officers before being hauled away. Minutes later, police rushed the shop-lined alleys behind the Jamek Mosque area, barking and banging their clubs against drawn shop fronts, as shopkeepers and customers sought cover behind lattice doors.


Plainclothesmen demanded those with cameras to shut them off or risk arrest. Back on Tuangku Abdul Rahman Road, police fired water cannons from atop police trucks crawling toward retreating protesters. An estimated 30,000 protestors managed to reach the king's palace and deliver the memorandum, according to the rally's organizers. Fitri Shukri, 31, a consultant who traveled from the northern state of Penang to attend the rally, said overall he was encouraged by the day: "This is a start. We know it takes time. But sitting at home won't help and Malaysians are beginning to realize it." 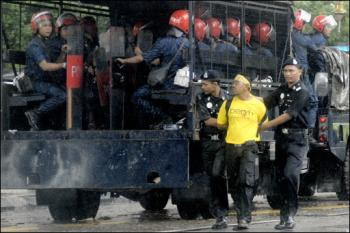 Abdullah came to power in late 2003, promising greater transparency and to fight the country's endemic graft. However, the general perception is that he has failed to deliver and there is a growing sense as he becomes entrenched in power that he no longer intends to. He has retained a number of high-ranking officials widely suspected of corruption. The anti-corruption agency remains under the purview of the ruling government. Critics also charge Abdullah with neglecting to address judicial corruption and electoral fraud and other cases of official abuse and neglect.


Malaysia's race-based political landscape means agendas often play out along ethnic lines. Saturday's protest witnessed the participation of a large number of members from the opposition, the ethnic Malay-dominated, Islamic PAS party, which apart from running on a clean governance platform would like to turn Malaysia into an Islamic state. But a much broader swath of Malaysian society was represented - activists, ordinary citizens, young, old, Indian, Malay, Chinese. Police expressed alarm at the large number of children present, state media reported.


"It was a citizens' event involving an issue that is quite universal," said activist Tian Chua. The last time Malaysians took to the street on such a scale was during the reformasi movement in 1998 after the nation's then deputy prime minister Anwar Ibrahim was sacked after challenging former prime minister Mahathir Mohamad's hold on power and later received a black eye from a beating in jail by police chief Rahim Noor.


Public participation in the political process waned sharply after reformasi, however. Indeed, a much overlooked consequence of the period is that the government has used that tumultuous turn of events to repel many Malaysians from being active stakeholders of the national development process. The ruling elite now often brands those vocalizing dissatisfaction with official policy short-sighted troublemakers intent on destabilizing the nation, and many Malaysians today echo that government line.


The government's rhetoric of fear and intimidation was employed once again during Saturday's protest. For instance, Abdullah was quoted as saying, "They are challenging the patience of the people who want the country to be peaceful and stable." Anonymously sent text messages warned people to stay away from Freedom Square, where an "illegal anti-government" rally would be held. It was illegal in the sense that gatherings of more than five people require a police permit and organizers were unable to obtain one on the grounds that it would block traffic and disturb business.


That the demonstration still managed to attract so many people (though supporters estimated as many as 40,000, police estimates put the number at 4,000) is testament to the level of dissatisfaction over Abdullah's governance, said Tian. Although the ralliers themselves were peaceful, and state security officials violent, it did not stop the state-run New Straits Times newspaper from running a story on Sunday entitled, "Illegal gathering causes traffic chaos in city." The story was buried on page four, reserving the front page for a photo of a girl who had had a heart transplant chomping on chicken from a skewer.


This despite that fact that international eyes were trained on Malaysia over the weekend, as much if not more over the government's handling of the rally than the calls of the demonstrators. The government's violent response to basic democratic rights has led some advocates and analysts to draw comparisons with the repressive military regime in Myanmar, which likewise aggressively extinguished street protests in August and September.


The New York-based rights group Human Rights Watch said in a statement, "If Malaysia wants to count itself a democracy, it can begin by upholding constitutional guarantees of free speech and assembly. The way the system works now, only the ruling coalition can get its messages out."


General elections are expected to be held by early next year and as it stands the voices for reform will probably only be heard in protests to those polls, which they argue will be systematically stacked in Abdullah's favor.